Progress has been made during this last month of good weather. I all goes as planned the culvert will be installed , allowing the paving of the roads within the Village site.

The large tree which the site designer had hoped to retain was found to be unsound, so was taken down the day the upper picture was taken. Another smaller tree came down in the recent wind storm, but there was no other damage.

The first duplex has taken on a new look with the addition of porches, thanks to the work of Wakefield Construction. The siding is on its way and will be the next step toward completion. The second duplex is ready for its roof, to be installed soon 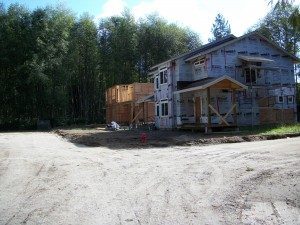