The Power of Positive Thinking

How did we come to have a Habitat for Humanity chapter here on the Sunshine Coast? For Ed and Gwen Hawkins, the answer is simple: it’s the result of the power of positive intention.

“It’s like the power of positive thinking,” Ed explains. “But this power is more… productive.”

While positive thinking has a certain mystical aspect to it, the power of intention requires action.“You decide something has to be done and proceed as if it has already happened. It works — but a lot of people think you are nuts.” Here’s how it worked here, and here’s why nobody thinks Ed is nuts at all.

The story begins in the early 2000s at a men’s church breakfast. “We were looking to do something for our community instead of always looking inward,” Gwen says. Ed, with his real estate background, was interested in housing. “Habitat was the only organization I had heard of that built homes and sold them to people at the poverty line. It sounded like a nice organization.” With the support of the Living Faith Lutheran Church in Davis Bay, Ed did the necessary paperwork and the chapter was launched in 2004.

“It was a whirlwind of activity,” Margie Garrard says. “Our spouses quickly became regular volunteers and all invited family, friends and neighbours to our events and work parties. “We faced a ton of challenges as we jumped into council meetings, group presentations, grant applications, raffle sales, event planning, recruiting three recycling teams for Gibsons, Pender Harbour and Sechelt — and the whole point of it all: finding a building lot and selecting and supporting a hard-working family to become successful Habitat ambassadors.

“I don’t know how we did it all, yet we did. Ed’s famous Blue Sky Thinking was hard to keep up with, because he was, as he is today, absolutely incorrigible!  Had he not been so, I doubt very much that we would ever have reached so high, dug so deep or worked our way through so many seemingly insurmountable circumstances.”

Garrard was no slouch herself. When Alcan offered an annual $60,000 prize to the Habitat affiliate that collected the most aluminum cans per capita, she got the recycling operation running so efficiently, our chapter won the award three years in a row. “After that, they changed the rules,” Ed laughs.

“Habitat Canada was reluctant to give us a chapter, but we were like a dog with a bone. They finally said ‘go for it’ just to get us out of their hair,” Ed says. Next step was acquiring a building lot. Ed made presentations to municipal officials up and down the coast, and the Town of Gibsons came through with a $30,000 grant. “We found a plot of land in Gibsons, but the neighbours didn’t want us there,” Ed says.

The chapter bought some land on North Road in Gibsons for $75,000. “The first house was basically all built by volunteers — 20 to 30 people in all, with 10 or 12 guys working all the time,” says Ed. That’s not to say that the community wasn’t quick to support the project.

When the chapter started its second project, a duplex in Sechelt, Ed, still busy promoting Habitat wherever he could, gave his card to a plumber at a presentation he was making at a school. One day shortly afterward, 18 plumbers rolled up in their trucks and went to work plumbing the entire duplex. The man was Arnold Skei, and his company was Sechelt Plumbing. It continues to donate its materials and expertise to Habitat to this day.
“We have had support from every community on the Sunshine Coast and it has made a difference,” Ed says. “When I tell potential donors about Habitat, their immediate response is, ‘what do you need?’ It is an incredibly supportive community. We are never turned down.” Right from the start, Ed and Gwen were both fully committed to Habitat for Humanity. Gwen has served as public relations chair and board chair and served on countless committees in addition to putting in thousands of hours of desktop publishing, making thank-you scrolls, posters, tickets, business cards and PR material. “I would be nobody today without the support of Gwen, my wife of 65 years, Ed says. Gwen likes to tell a story about one of Sunshine Coast’s first Habitat families, a single mom with two children. “Irene kept her house so immaculate. As soon as she moved in, she got soil and made a garden. We could see we had a winner. Unfortunately, one of the volunteers who helped build the house thought she was a winner, too. He ended up marrying her and taking her away from us. She went from a struggling single mom to a family with a bright future.” Vivian’s story is also inspiring. “She made me feel just how worthwhile Habitat can be,” Gwen says. “She was separated from her three kids in the Philippines and was working three jobs here, plus volunteering. She wanted a house for her family so badly. I finally met her children at the Canada Day parade in Sechelt two years ago. They had just arrived from the Philippines and they were all moved in to her Habitat home. She ran across the street and hugged me. She is a perfect model for a Habitat family.” As the chapter moved on to its next project, Habitat Village, on the Sunshine Coast Highway in Wilson Creek, more and more volunteers signed on. Gwen thumbs through a book with the names and phone numbers of all the volunteers she could call on for women’s work days. The women would install insulation and do the interior painting. It’s an impressive book. Meanwhile, Ed kept busy mining other sources of revenue for Habitat. He convinced local building supply companies to donate a playhouse kit to Habitat, which volunteers built (on Ed’s boat trailer) and raffled off. Canadian Tire donated a greenhouse kit, which was also raffled off.  “But the main source of income for Habitat is always the ReStore,” Ed says. Sunshine Coast’s first ReStore was in Wilson Creek, in the basement of the building where the FYiDoctors building is now. When that lease ran out, Habitat rented a hangar at the airport for a year. “We were surprised when our sales kept up. People were willing to drive all that way to the airport. Meanwhile we were desperately looking for a downtown building.” One day, Ed was driving by Spence’s Furniture (where ReStore is today) when he had an inspiration. “I didn’t even know the owner, but I called him up on a whim and asked if he would rent us the building. The owner said, ‘it’s weird you are phoning me. I have had health issues and I was just talking about selling the business and moving on.’  “I said, ‘I don’t want to get your hopes up. We can’t afford to pay the going rate.’ He said he’d think about it and call me back. When he called me back he offered us such a good price it made it feasible for us.” Other moments of serendipity followed. A volunteer used to use his own truck to go to the dump to sort and haul recyclables. When he had to give that up for health reasons, the head of the recycling committee, Margie Garrard, called Ed almost in tears. “We have to have a pickup truck, she said. ‘We’ll get a truck,’ I told her.” The next morning, a neighbor called and told Ed he had an old truck he wanted to donate, and did I want to look at it. I said, ‘I don’t need to look. We will take it.’” The “power of intention” laid a firm foundation for Habitat for Humanity here. But Ed is the first to acknowledge that he has had an army of volunteers with him. But it truly is “the power of every” that has kept his and Gwen’s vision alive. 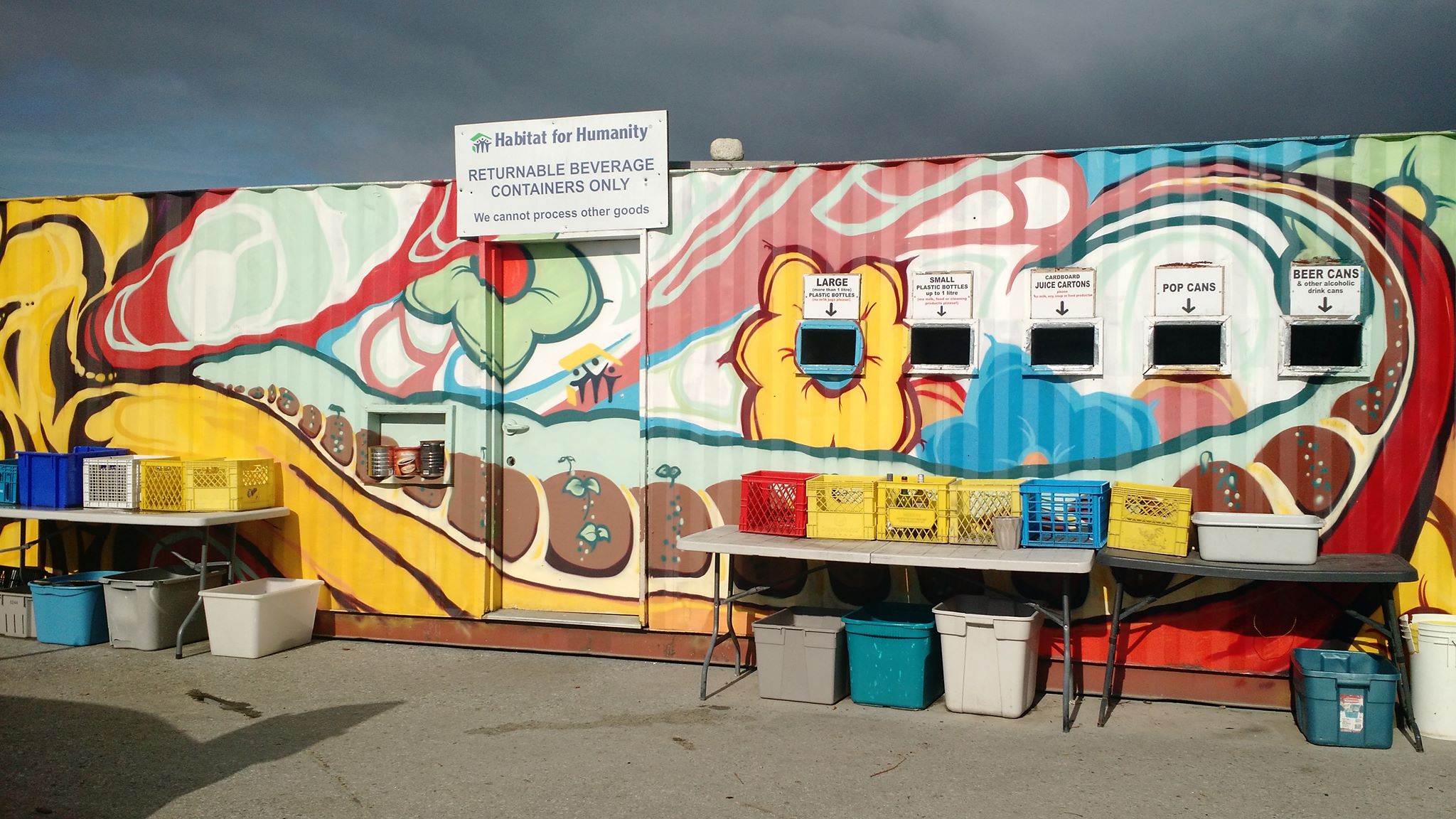 This operation was initially the only source of funding the affiliate had. It has and is run totally by a team of dedicated volunteers.

This successful operation is located on Black Bear Road in Sechelt.

After the recycle operation was established, our affiliate started a ReStore which continues to grow and prosper.

The store counts primarily the local community and some commercial enterprises outside of the Sunshine Coast to supply us with donated household and building goods which are then sold to the public.

It is a popular stop for many “Coasters”.

Our ReStore has grown since its inception and is now our major funding resource.