A hike through Hidden Grove Park near Sechelt takes you through fine young groves of Western Cedars and Douglas firs. In some places, the ground beneath is dense with ferns; in others, moss carpets everything and mushrooms pop up like they are a part of a magic act.

But it’s the rare, ancient, towering, fire-scarred trees that stop you in your tracks and make you want to pay homage to their strength and resilience.

There are humans who have this same effect, and Habitat for Humanity Sunshine Coast (HFHSC) is celebrating two of them at its Carter Work Project kick-off July 9 at HFHSC Village.

The annual week-long event has special significance for Canada this year. Former U.S. President Jimmy Carter and his wife Rosalynn are going to Winnipeg and Edmonton to support Habitat for Humanity Canada’s ambitious goal to build 150 affordable homes as part of the nation’s 150th birthday celebrations.

Jimmy is 92, and Rosalynn is 89, but they aren’t just coming to Canada to swing a ceremonial hammer and make some speeches. They are coming to work.

“I hope that when I’m in my 90s, I have half the energy President Carter and Mrs. Carter have, to spend an entire week transforming lives by helping build homes for families in need of housing,” says Mark Rodgers, President and CEO of Habitat for Humanity Canada.

In 2015, Carter was diagnosed with cancer, so what did he do? He kept right on working for a cause that has been dear to his heart since 1984.

In the middle of aggressive treatments, there he was, hammering and sawing alongside other volunteers at a Habitat worksite in Memphis, Tenn., while Rosalynn pulled nails from her own leather workbelt to install wall brackets. Two years later, they are both still going strong.

The Carters aren’t the only Habitat stalwarts. We’ve got several of them right here on the Sunshine Coast.

“To me, volunteering knows no age limit, says HFHSC executive director . “I have learned so very much from the people who have travelled the road before me.”

She’s talking about local volunteers such as Ed and Gwen Hawkins, both in their 80s, who helped found HFHSC almost 10 years ago and still serve on the board and other committees.

Or Ross Hay-Roe, 80, who volunteers with his wife Lee at Habitat’s recycling depot at Salish Soils.

“When we finally decided to retire, at age 70, the real reason we were ready to start volunteering was the desire (need?), after working all those years, to be useful,” Ross says.

Gary Weber, 71, also volunteers at the recycling depot. Why does he do it? “It’s something to do. It gets me out of the house.” Reminded that golf gets you out of the house too, he laughs and says, “Well, I do that too. 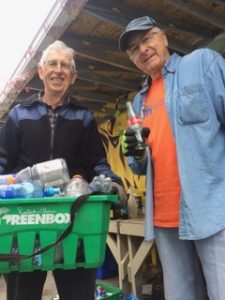 Where: HFHSC Village on Sunshine Coast Highway near Wilson Creek.

What: Coast FM radio host Matt Morris will emcee the event and Grant Olsen and friends will provide musical entertainment as Habitat families, volunteers and board members welcome guests and offer tours of the new homes. Beverages and food will be served.

“My family, friends and I, along with a squad of wonderful Habitat volunteers, worked for a year to complete our home. The three of us are so happy there. I still pinch myself to see if I’m dreaming!

Last year, Ken and Rebecca Nelson and their four (soon to be five) children also moved into their Habitat home, right next to Zarah’s.

“We always talked about owning our own home,” Rebecca adds, “but that wasn’t going to happen for years.” Because of Habitat’s home-ownership model, the Nelsons are paying 50 per cent less for their mortgage payments than they were for rent. Ken, who works for a construction company and also has his own business, KSN Tiles, had long hoped to be able to step back from his long workdays and spend more time with his family. Having the stability of their own affordable Habitat home is making that possible.

“We were super busy this past year,” Rebecca says. The three older kids are enrolled in dance classes and Ken now has time to be a coach for their T-Ball teams.

Meanwhile, the Rosses and the Manning-Falardeaus are looking forward to the changes their Habitat homes will bring to their lives.

Danielle and Devin have already started a new business, Rain or Shine Exterior and Interior Finishing, with an office soon to open on Cowrie Street.

Kat, who is now upgrading her skills as a makeup and effects artist for the film industry, says of her new home, “I have spent my whole life trying to find a space where we have safety and security. We are finally getting to that space. It will be my biggest exhalation I have taken in years.”

On July 9, they’ll get their payday: two families — Kat Ross and her sons Phoenix and Mihailo, and Danielle Falardeau, Devin Manning and baby Amelia — will get the keys to their new homes.

It’s a life-changing moment — just ask  Zarah Gale and her two young daughters, who moved into their Habitat home a year ago.

“For three long years after ending my marriage, we bounced from rental to rental. I work full-time at a great job, and yet very quickly I realized that rent was taking a greater portion of my monthly income than I could reasonably afford.

“As we moved from place to place, the rents grew higher and the standards of the accommodations decreased. Eventually it was devouring 70 per cent of my income; my oldest child was sleeping on a couch while my youngest and I shared a bed in a tiny basement apartment filled with someone else’s belongings.

“When that home was sold from underneath us, we moved in with my children’s father, where I occupied a glorified shed with no running water and an abundance of rodents (our daughters shared the main house with their father). I was grateful for this, but I knew I had to take action to drastically improve our lot. 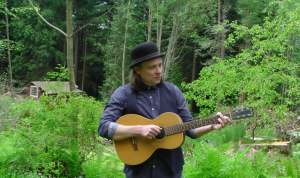 Grant’s music comes from the heart — whether he’s playing folk roots favorites or his own original songs. An accomplished multi-instrumental musician, he performs with Butler in the Hey! and other projects. His solo performances are remarkable

The 2017 Carter Work Project will be held at sites across Canada July 9-14, 2017. The two main build sites will be hosted by Habitat Edmonton in Alberta and Habitat Manitoba in Winnipeg. President and Mrs. Carter and hundreds of volunteers will help 150 families across Canada, including Indigenous families, access affordable homeownership.

For over 30 years, former U.S. President Jimmy Carter and former first lady Rosalynn Carter have traveled across the world with Habitat for Humanity and thousands of volunteers, donating their time and voices to build and improve homes alongside Habitat homeowners. Their time and effort helps raise awareness of the critical need for affordable homeownership, and how Habitat helps homeowners achieve the strength, stability and self-reliance they need to build a better life for themselves and their families.

Since 1984, Habitat for Humanity’s Jimmy & Rosalynn Carter Work Project has drawn nearly 100,000 enthusiastic volunteers who have rolled up their sleeves to help build or improve homes in partnership with families in need of affordable housing. Together with the Carters, these volunteers have built, renovated or repaired more than 4,000 homes in 14 countries.