The toe-tapping tunes of the Billy Hillpickers and an abundant Southwestern BBQ served up by Chef Spencer Watts drew a colorful and enthusiastic crowd to the Gibsons bluff last Saturday night. The first annual “Habitat Hoedown” was a fundraiser to remember with a sell-out crowd representing some of the Coast’s most passionate community supporters. 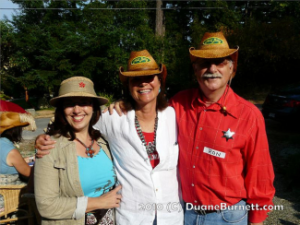 Gibsons Mayor Barry Janyk’s message of appreciation for Habitat’s commendable efforts toward affordable housing was read by Councilor Wayne Rowe, and special guests from Industrial Alliance were proud to witness overflowing appreciation for their sponsorship.

Habitat is looking forward to the completion of the first of seven duplexes by year-end, providing more homes for Sunshine Coast families. “Habitat Hoedown” hosts Ron and Deborah Pepper are extending a whole-hearted thank you to everyone who contributed to the more than $7,000 raised for Habitat families.