Skip to content
Planned giving: hope for generations to come

Habitat for Humanity Sunshine Coast would like you to take a moment to contemplate your own mortality.

It’s a scary thought; one that we often try to push into the dusty corners of our minds. But for some people on the Sunshine Coast, it is a comforting thought as well. Why? Because they know the good they have tried to do all their lives will also continue long after they are gone, thanks to planned giving.

They don’t do it for recognition or accolades. “I am not putting out a flag and trying to show everybody how wonder- ful I am,” one person who asked to remain anonymous said after bequeathing a sizeable amount to Habitat for Humanity Sunshine Coast (HFHSC) in their will. They are doing it because they have a desire to support the great causes of their communities — including HFHSC.

Even as housing prices soar on the coast, Habitat is able to build extremely affordable and livable family homes because of the generosity of Sunshine Coast residents and businesses.

Their generosity takes many forms. Dozens volunteer their time at the recycling depot, which raises tens of thousands of dollars for affordable housing 5 cents at a time. Others wield paint brushes and hammers at the build site. A couple dozen executives from several Bank of Montreal branches are invading the site this week to help frame two new duplexes. Still others volunteer at the ReStore, which benefits the community in so many ways.

“ReStore should be more visible (it’s on the Sunshine Coast Highway in Sechelt, next to the McDonalds),” said one first- time visitor to the store. “What a great store. High quality. Great stuff. I had no idea.”

If someone wants to make a sizable donation to the store (some people donate pretty much the entire contents of their home while downsizing or renovating), manager Luanne St. Louis will often visit the home to select which items the store wants and arrange for a ReStore truck to transport it.

Donations such as this pack a triple punch. First, the donors get charitable receipts and have the satisfaction of knowing furniture and household items they have loved will soon have good new homes. Second, the purchasers get to enjoy their new treasures for a bargain price. And third, most of the money spent at the store goes directly into building affordable housing on the coast.

While direct gifts of labour, household goods or cash are great ways to show your support, HFHSC is also encouraging people to remember it in their wills.

“Planned giving can mean leaving a legacy for the future of Habitat and this provides individuals with a special opportunity to demonstrate leadership, with an investment that supports struggling families on the Sunshine Coast,” says HFHSC board chair Laurie Vance. “Planned giving will also enable Habitat to provide the donor with lower income and estate taxes.”

Another bonus is that publicly traded securities (such as shares, bonds and mutual funds) can be donated to HFHSC as an alternative to cash. These gifts are exempt from any capital gains tax, and the tax receipt reflects the full market value of the gift on the day of transfer.

The Sunshine Coast Community Foundation is another way to help.

The foundation was established in 2003 by concerned citizens, says executive director Wendy Francis, seeded by a $100,000 donation from the Sunshine Coast Credit Union. “The community fund movement has become a popular vehicle to make the connection between causes and the people who want to help,” she says. As the donations have increased (the foundation now oversees about $4 million in assets), the grants the foundation hands out have also increased

“So far this year, the Foundation has given about $200,000 to various charities,” Francis says, noting it is an exceptional year because of additional support from the Community Fund for Canada’s 150th.

These charities included the Christian Life Assembly’s school lunch program, building restoration at Halfmoon Bay Daycare, and a permanent printmaking studio at Sechelt Arts Council. You can see a full list of recipients and get more information at the foundation’s website: sccfoundation.com.

Any charity is eligible to apply for grants, and there are also funds where donors have specified that the earnings should go to specific charities, such as the Sunshine Coast Community Services Society.

“We have 18 funds that are targeted like that, which have been set up by the charities themselves,” Francis says

Individuals can also set up targeted funds within the foundation, with grants going to their designated charities each year.

Why do people donate? “They can create or support a fund that exists in perpetuity. It really is, to use the cliché, the gift that keeps on giving forever,” Francis says, noting that only the earnings from the endowment funds are handed out and the principal is never touched. 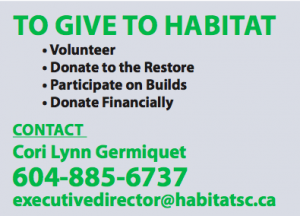 While Habitat for Humanity Sunshine Coast has no target- ed fund at the foundation, it regularly applies for and receives grants and it is always on the lookout for more sources of funding, as the affordable housing crisis on the Sunshine Coast becomes more and more severe.

Anyone who wants to learn how to leave a legacy gift that would provide a sustainable source of funding for Habitat for Humanity Sunshine Coast is welcome to contact the Foundation.

There is a lot of generosity on the Sunshine Coast. Many who have retired here are self-made business people, and the Habitat model appears to resonate with them. It is a hand up, not a handout. Down payments are made with sweat equity rather than cash, and interest-free mortgage payments are capped at 25-30 per cent of net household income. This means hard-working couples and single parents can finally get their heads above water and begin making their own contributions to their communities.